Anderson Silva: “I Believe Nick Diaz Is Gonna Come Back Stronger”
published on October 1, 2021
curated and posted by BRWLRZ Team

Recently, Anderson Silva tried his hand at boxing as he and the UFC parted ways in November of 2020. While there were skeptics when he was paired with Julio César Chávez Jr., “The Spider” came to fight and put on a show after defeating the boxing legend by decision.

Instead of using eight limbs, Silva utilized his sharp hands and dominated the former WBC middleweight titleholder. Then, after being matched up with Tito Ortiz and pegged as a big favorite, the former UFC star demolished “The Huntington Beach Bad Boy” in the first round. With his transition into boxing underway, Silva is 2-0 in the twilight chapter of his career. Prior to his last two fights in the ring, the 46-year-old slipped on the boxing shoes in 1998 and 2005.

UFC 266 went down last weekend, (Sept. 25, 2021) and Anderson Silva gave his opinion on the return of Nick Diaz and where he sees the Stockton native going in his UFC career.

On the marquee pay-per-view, Nick Diaz took on Robbie Lawler for a second time. Lawler entered the fight on a four-fight losing streak. The two combatants put on an instant classic and warmed up the crowd for the next two title bouts. While Diaz appeared to be back and in full force, the 209 representative was unable to maintain the pace he started with early in round one. Shortly after absorbing a huge shot from “Ruthless” in round three, a grounded Diaz waved off the contest and said, “no more.”

Despite coming up short after his six-year hiatus, Diaz remains one of the hottest commodities in the UFC right now. Anderson Silva gave Diaz his flowers when talking to MMA reporter Ariel Helwani, and believes the Stockton native will return to the Octagon even better in his next appearance.

Do you think Anderson Silva would beat Nick Diaz in a boxing match? 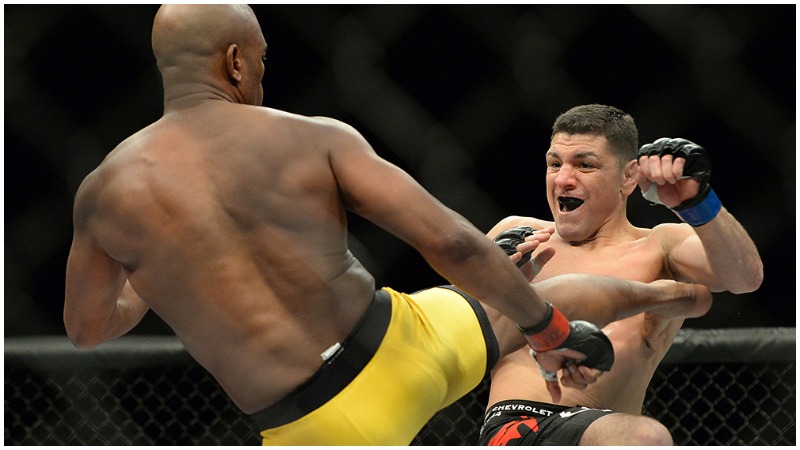