Aljamain Sterling considered recent comments made by Cory Sandhagen to be a breath of fresh air.

Aljamain Sterling’s UFC bantamweight title reign is arguably the most controversial in company history. After winning the title via illegal knee from opponent Petr Yan at UFC 259, an overwhelming number of fans have blasted Sterling for playing the system. The accusation is that Sterling acted up the impact of Yan’s knee to win the title and is now attempting to prolong his reign by ducking Yan and milking the situation for all it’s worth.

In the weeks that followed UFC 259, Sterling has had countless interactions with this fan base but has failed to get through to them. That, Sterling believes, is because it is impossible to have a reasonable conversation with these detractors.

“The ref is supposed to give me my five minutes. The doctor came in, as he was checking me, he thought the five minutes wouldn’t be sufficient enough, and called the fight,” Sterling explained on an installment of The MMA Hour. “That’s not on me. And one, I don’t think fighters should be put in that situation to feel like, ‘You need to carry the warrior shield. Rah! You are a warrior! You’re Anthony Smith! You’re a lionheart! Oh, my God! You’re amazing. You took an illegal shot and you continued. What a warrior.’ No, that’s absolutely stupid.

“Let me blast him in the head with a knee, and then we can continue with the fight. How about that? The same way I couldn’t see it, let me let you close your eyes, spin you around a couple times, and blast you in the head, and see if we can continue with the fight. I get so confused by the logic, and this is why I just troll. Because it’s like, dude, I can’t have a reasonable conversation with some of these people.”

Cory Sandhagen: The Voice Of Reason?

Many had already argued that Sterling should have never been awarded the title at all. On October 30, Yan and Sterling were scheduled to settle the controversy once and for all. Unfortunately, due to lingering issues following neck surgery, “The Funkmaster” was unable to make the event. This caused many fans to demand Sterling be stripped of the bantamweight title, but Sandhagen fails to see the justification for that move.

“No, not really, man, with the way that it went,” Sandhagen said on The MMA Hour about if Sterling should be stripped. “It depends how long he really has to be out for. I think that it would be kind of a bad way to strip someone. For one, he got a really flagrant foul in his last fight, and that’s what got him the belt.

“But also, man, the guy is actually injured. The guy had actual neck surgery. So I don’t think that you should strip someone for getting flagrantly fouled or for having a legit injury unless it’s gonna be a long time.”

Sandhagen also stated that he questioned the timing of the Sterling/Yan rematch from the moment it was made considering the severity of having neck surgery. Sterling heard The Sandman’s remarks and put them on display as a model of what he thinks logic and reason sound like.

If only all human brains actually worked like this. Ya know like, Using common sense to analyze different situations. Smart to question such an early return and hopefully he’s been training that entire time so that we get 2 in shape competitors, for a 5 RD scrap. https://t.co/epZDutydem

“If only all human brains actually worked like this. Ya know like, Using common sense to analyze different situations. Smart to question such an early return and hopefully he’s been training that entire time so that we get 2 in shape competitors, for a 5 RD scrap,” Sterling’s wrote in his retweet of Sandhagen’s remarks.

Sterling is referring to the upcoming bout between Petr Yan and Sandhagen at UFC 267 for the interim bantamweight title. There is no clear timetable for Sterling’s return, so the winner of this fight could wind up being the official champion after all.

Although Sandhagen came to Sterling’s defense here, even he admits that the Funkmaster would have to be stripped of his gold at some point. The ideal time frame for that decision according to Sandhagen? Nine months, which would be just before the end of the year.

Do you believe Aljamain Sterling should be stripped of the UFC bantamweight title? 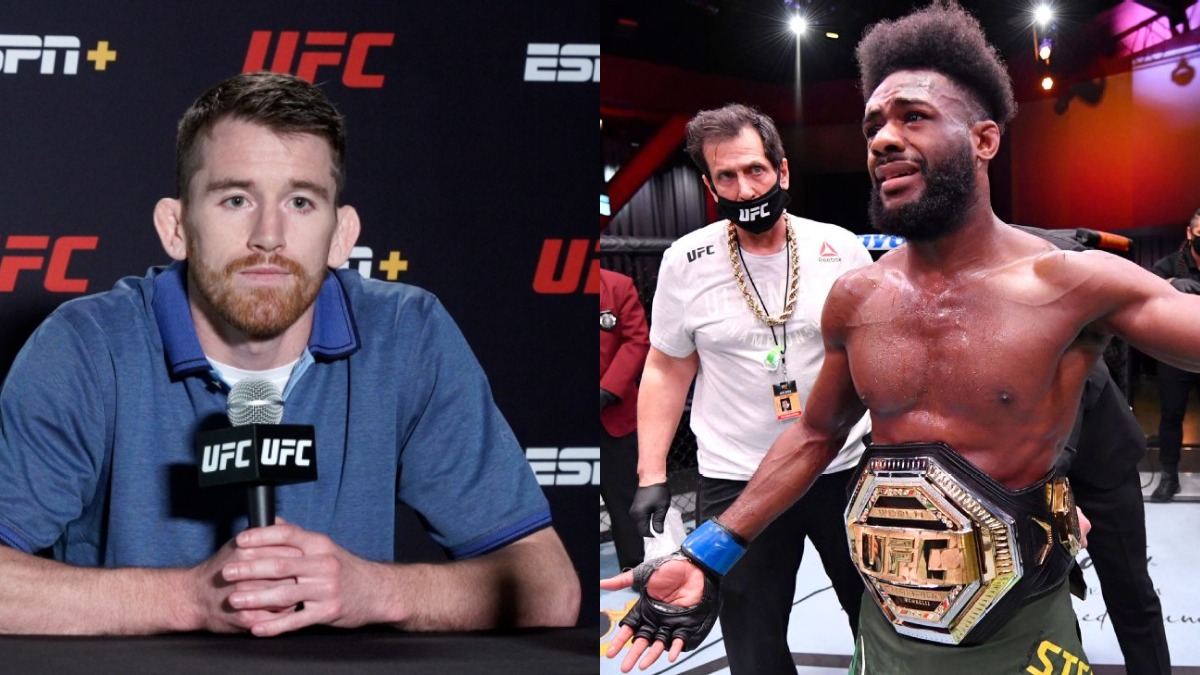