Aleksandar Rakić is eager to step back into the Octagon, and the #3-ranked light heavyweight has offered up a date for the Anthony Smith rematch.

The last man to defeat Smith was Rakić, and since that night, “Lionheart” has tapped into his primal desire to throw leather. The American emboldened his name within the 205-pound weight class following his last three first-round finishing performances. After Smith’s most recent submission of Ryan Spann, the 33-year old called out his former nemesis Rakić for a December throwdown. Shortly after, the Austrian native responded on social media in favor of the potential rematch.

With just over one year removed from their first encounter, Aleksandar Rakić spoke on The MMA Hour and nailed down an exact date as to when he would like to test himself against Smith. The light heavyweight also emphasized that his second fight with Smith will need to be featured as the main event.

“He had an amazing win on Saturday, he (has) a three-fight winning streak after our fight. But Mr. Smith, be careful what (you) wish for. Aleksandar Rakić said. If the UFC wants a rematch, it has to be a main event, December 18th, and after this I’m going to get my title shot.”

Rakić last stepped in the Octagon in March against Thiago Santos. Many were itching to see how the 29-year old would stack up against “Marreta”. Rakić won the fight by decision and utilized his suffocating clinch tactics against the fence. The light heavyweight kept Santos at bay with leg kicks to advance his strategy too. Rakić did not score the finish, though he walked away victorious.

Rakić’s tear through the 205-pound weight class has been quiet compared to Smith’s last three victories. Normally, a rematch so soon doesn’t align, but the two remain enthusiastic to face each other. With a December date all but locked up, we may get that early Christmas present after all.

Do you favor Aleksandar Rakić against Anthony Smith in a potential rematch? 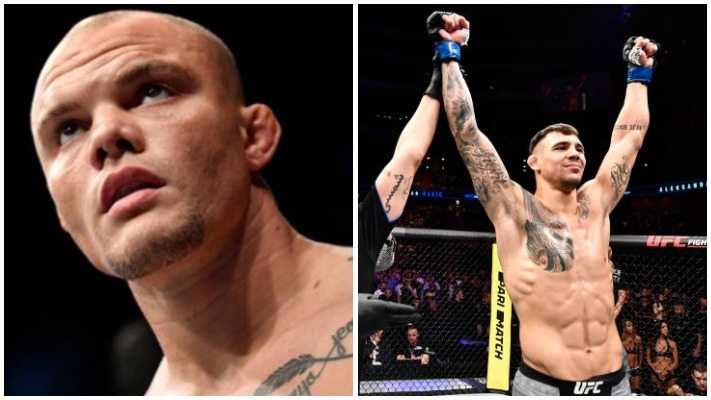