Following Khabib Nurmagomedov‘s claim that he can’t get back to his best, José Aldo has suggested the Russian talks too much.

The former UFC Lightweight Champion’s comments came after Aldo recorded his second bantamweight victory in August this year. In the UFC 265 co-main event, “Junior” faced his compatriot Pedro Munhoz. An impressive performance across three rounds saw the 35-year-old defeat “The Young Punisher” by way of a unanimous decision.

Despite taking a step closer to earning a second championship opportunity at 135 pounds, not everyone was impressed. Khabib stated that the Brazilian can’t achieve a second peak in MMA, and suggested he’d be beaten by the top names in the weight class.

Aldo Hits Back At “The Eagle”

While Aldo may have lost three fights in a row prior to his win against Marlon Vera last December, two came against future champions in Alexander Volkanovski and Petr Yan. The other, which was opposite Marlon Moraes, was a controversial decision that most believe should have seen Aldo with his hand raised. With back-to-back wins in his new weight class, Aldo looks to be making a late surge back to the top.

With that in mind, the former featherweight kingpin doesn’t understand why Khabib decided to criticize his latest victory. During this week’s episode of MMA Fighting’s Portuguese-language podcast Trocação Franca, “Junior” claimed Glover Teixeira‘s victory at UFC 267, which saw him become champion at the age of 42, proves the Dagestani’s assessment was wrong.

“He’s saying you can’t peak again, but we just saw an example with Glover [Teixeira], who got there, lost, and got there again at age 42 and won [the UFC title], completely dominated the champion, took him down and submitted him,” Aldo said. “[Israel] Adesanya himself fought [Jan Blachowicz] for five rounds, a pretty boring fight, two high-level athletes, and Glover, who’s older than me [won].” (h/t MMA Fighting)

Assessing why he believes Khabib doubted his abilities, Aldo suggested “The Eagle” was simply seeking some post-retirement attention.

“Sometimes Khabib talks too much. He’s not doing much these days, he’s retired, so he’s looking for [attention] that way.”

After dominant title defenses against Conor McGregor, Dustin Poirier, and Justin Gaethje, Khabib retired from active MMA competition after UFC 254 last October. Having closed the book on his in-cage career with an unblemished 29-0 record, the Dagestani has since turned his attention to his business ventures, ownership of the Eagle Fighting Championship, and coaching his friends and teammates.

Aldo, meanwhile, is still on the hunt for more success in the UFC. Having built his first winning streak as a bantamweight, the 35-year-old will look to make it three straight when he next enters the Octagon. The Brazilian is set to main event the December 4 UFC Fight Night card against fellow top-five contender Rob Font.

Do you agree with José Aldo? Was Khabib Nurmagomedov seeking attention with his comments? 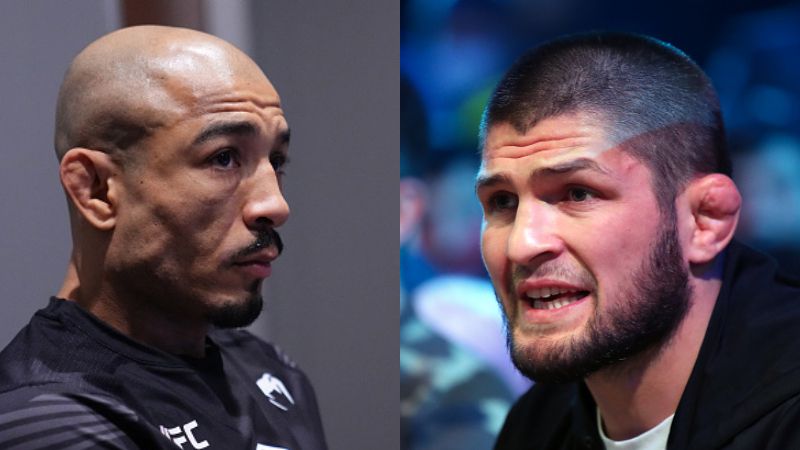